I Kept Wanting To Make It Plural 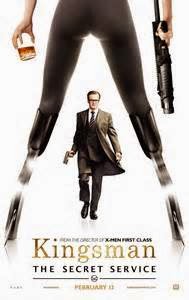 So, last week, I saw Kingsman: The Secret Service.  I wasn't entirely sure what to expect when I went to see it, except that it starred Colin Firth, and that it involved a, well, secret spy agency.  Honestly, I don't even think I was aware that it was rated R.  I just knew that the previews looked great, that almost everyone everywhere said it was great, and that it wasn't entirely serious.

On the one hand, if you're interested in seeing this movie, perhaps that's all you should know.  That being said, I think there's a couple things that should be mentioned, even though I'll be striving to avoid spoilers.

Essentially, Kingsman deals with Taron Egerton plays "Eggsy", the son of a deceased Kingsman.  He's solidly working class and listless, despite being athletic, smart, clever, and so on.  He's not quite a chav, but he's certainly rubbing elbows with them.  Into his world come Colin Firth's Harry Hart who introduces Eggsy into the world of the Kingsman.  Queue training sequence intercut with The Machinations of an Evil Megalomaniac Who Wants to Take Over the World.  After all, it is a spy flick.

Kingsman has its roots firmly planted in the Bond end of the spectrum, as opposed to the more "realistic" Bourne movies or films like Tinker Tailor Soldier Spy.  That being said, it is more than willing to poke fun at the Bond style movie, especially the less serious ones from the Moore years.  Still, it gleefully eschews the po-faced seriousness of the Daniel "Poutiest Bond" Craig years, delighting in its gadgets and gizmos, such as bullet-proof umbrellas and cigarette-lighter grenades; however, it manages to take reality into account on such things.  There's a scene where Hart is showing Eggsy the "toy room" and Eggsy asks about a wall covered in smart phones and tablets.  Hart, almost sadly, explains that they're perfectly normal, because they're already ridiculously powerful.

Circling back, I want to address the fact that this is an R rated movie.  It's not rated R for language or for a random topless scene.  It's rated R because it's almost shockingly violent.  Keep in mind that this is the same people who did Kick Ass.  While it is stylized to a certain extend (not to the extent of, say, Sin City), there is quite a bit of it.  Sofia Boutella plays the part of Odd Job; she's named Gazella, presumably because of her prosthetic feet (the curved spring style; it's an appropriate name).  He razor sharp prosthetic feet.  Odd Job cut heads off statues; Gazelle dismembers people.

I don't want to scare people away, though.  While violent, it doesn't really linger lovingly on it, and while there's plenty of blood, it never veers into the realm of gore.  As someone who has little stomach for gore, I know what a fine line it can be for a film to walk.  I think that this film stays on the safe side, for all but the queasiest stomachs.  And, really, only one fight overstays its welcome, largely because it's intercut with the reactions of three different people.

This isn't a film that will make you think.  It isn't really even a deconstruction of the genre.  It is, however, an exceptionally enjoyable film, and far, far more fun than I've had with a movie in a long while.  Kingsman may have its tongue firmly planted in cheek (as one review put it, "tongue planted so firmly in cheek, it's poking out the other side), it never winks.  It's a fantasy, pure and simple.  It knows that it's not serious, but it revels in its violence and silliness, as opposed to sneering at it aloofly.  It's well worth seeing.