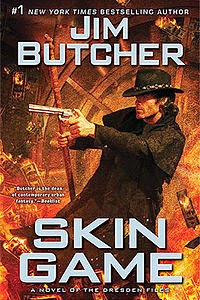 Skin Game is the fifteen book of the Dresden Files series by Jim Butcher.  Before I go any further, I just want to congratulate Mr. Butcher on getting this far.  Fifteen books in a series is a lot of writing, and he continues to keep it interesting.

Of course, being fifteen books in means there has been a lot of stuff going on up until this point, and writing a truly spoiler-free review is more than a little complicated: "After being on [REDACTED] for a year, waiting to hear from [REDACTED] the new [REDACTED], Harry has spent his time in the [REDACTED] yelling "Parkour!" like a lunatic.  That finally ends when [REDACTED] arrives and tells him that his next job as [REDACTED] is to team up with Nicodemus on a job."  And that's just the first couple chapters.

But, setting aside specifics, we can talk about the book in a general sense: Jim Butcher decided to try his hand on a heist story.  Make no mistake, this is a heist story through and through.  I wonder if Butcher was reading Raymond Chandler or watching Mamet's Heist.  It's all there.  The pacing, the episodic story telling (I didn't even realize it at the time, but Nicodemus is all but putting up title cards with his folders), the questionable loyalties, the twists...

Butcher keeps the pace going, managing to avoid bogging things down, while also keeping from leaving you exhausted.  It's a delicate balancing act, especially when everything goes to Hell (heh).  He brings in some familiar faces and some new ones, and pulls a couple really unexpected ones out of his hat.

Essentially, at this point, reviews are mostly pointless.  We're fifteen books in.  You should know if you'll like the book or not.  Hell, you've probably read it already.  So without further ado...

Right then.  Harry's ordered by Mab to help Nicodemus rob Hades.  Just let that soak in for a minute there.  Right.  Instead of going beat by beat, I'd rather just hit a few points that I think are good for discussion.

First, the thing on everyone's mind: Binder.  No, just kidding.  It's nice to see him again, but come on.  It's just binder.  I will say that his line toward the end about not trusting Harry because Harry didn't kill him like he promised certainly says something about the man.  Also, it was nice to see Anna again.

So let's move on to Hades.  I like how Butcher didn't take the "evil god" route with Hades.  In fact the portrayal of Hades is what I had hoped it would be, and I was endlessly amused by how he mostly just wanted to have a chat.  I'm seeing certain parallels between him and Herne.  That said, I don't think Herne is a mask of Hades, despite the precedent being set by Odin/Santa.  I'm mainly resting this on Herne having a specific demesne in Faerie, something we haven't seen from Santa.  But I suppose it's certainly possible, and would be... interesting.  Also, Spot.  That damn near knocked me off my chair.

Murphy.  Oh, Murphy.  Looks like Butcher is charging head first into a Murphy/Harry relationship.  I'm less enthused about that, but I can't say it hasn't been brewing.  Of course, something like that could get very, very messy seeing as how the Knight is also "The Consort of the Queens".  Ugh.  Mother Winter duty.


Okay, okay, let's talk Lasciel.  Uf.  At this point, it's important to establish the difference between Lasciel and Lash.  For one, Lash is dead (I'll get back to that).  For another, Lasciel is a bit of a bitch.  Her brief appearance seems to imply that she's not all that interested in a mutual relationship with her host.  She also seems to have a real desire to destroy, and really hates taking orders (probably why Nick gave it to Harry and why it was surprising he'd let Lasciel out).  I don't know how much of it was Lasciel being furious at Harry's rejection and how much was just her being her, but there is certainly a gulf of difference between her and White Night-era Lash.

So how about Lash?  The mechanics of this particular twist are a little fuzzy to me, especially the long... gestation.  I'll be interested to see where Butcher goes with baby-Lash.  Also, she's in Bob's backup skull.  Was that a temporary seizure?  Did Bob give that skull as a gift?  Did Bob ask for that skull because he knew what was happening and knew that it would be necessary?  Personally, I'm going with temporary seizure.  Something else to chew on: this is Harry's second child, both of which had their mothers killed either by Harry's hand directly or because of his actions.  The man's harder on mothers than a Disney film.


Oh, and real briefly, can we stop having the Harry Dresden Moping Hour?  I know he's upset about the whole Winter Knight mantel thing, but we've had this in Changes, Ghost Story, Cold Days, and now here, too.  It's getting a little old, and I thought he had worked it out in Cold Days.  I mean, come on, he had a freaking archangel tell him it was okay (twice!) and he's still going on about it.  I realize it's a big deal, but it's getting tiresome.


This is getting long, I know, but there's a couple other things I want to touch upon, because I thought they were very interesting character points:

Nick, Deidre, Tessa.  Nick sacrificing Deidre, partially to get them through the Gate of Blood, but also to keep her "safe from the enemy".  Clearly Nick knows about the outsiders, and is concerned about them.  Of course, his freaking apocalypse kick can't be helping things.  Honestly, those motivations kind of confuse me.  He doesn't want Deidre taken by outsiders, but he want to bring about an apocalyptic state of mind, which could only help the outsiders.  And, on top of it all, it's Nick doing this.  He doesn't have a partnership with Anduriel; he's totally and completely in charge.  Tessa, on the other hand, comes across as more human.  She's just trying to save her daughter.

So the Holy Grail is a weapon, huh?  Well, I suppose the Shroud was used as one, so the grail could be too.  I can only imagine what Nick will be able to do with that.  Then again, Harry has the trilingual sign; the Crown of Thorns; the Lance of Longinus (or at least its blade); and either the True Shroud, his loin cloth, or possibly the cloth/sponge that was used to offer him sour wine.  Holy Grail or no, he still has the Complete Crucifixion Playset.  But I wonder which one Nick was really after.

Also, how about the British dude in Demonreach, who's there intentionally because it's stasis.  I'm sure everyone is immediately assuming it's Merlin.  I too assume that.  We're all probably wrong.


There's plenty more to dig into, even on just a first reading, but the last character I'd like to shine a light on is Grey.  I'm assuming he's a scion, like Kincaid.  His willingness to help Harry, and then to charge him so little seems to imply either a debt (possibly even a Debt) to Harry's mother, or just an odd fondness, which seems to be a common theme lately.  It's also possible that he figured have Harry owe him a favor would be a good bet.  It's really hard to say, but it seems pretty clear that he knows that Harry is a starborn (whatever the specifics of that are).  Regardless, he's an interesting character, and I look forward to seeing him again.


And one last thing.  The moment Nick shattered Fidelacchius, I knew it wasn't destroyed.  Way back in Grave Peril, Amoracchius couldn't be unmade until it had spilled innocent blood, even after its purpose was betrayed.  The reveal on its reformation in Butters's hands was still priceless, though.  A Jewish Jedi Knight of the Cross.  I like to think Shiro would be amused by that.


Skin Game was one hell of a book.  It told a great story, wrapped up a few plot threads, and created a whole bunch of new ones.  Butcher has really hit his stride.  I just wish I didn't have to wait another year for Peace Talks, which, according to what I've heard, is going to be balls-to-the-wall, and prominently feature Molly.