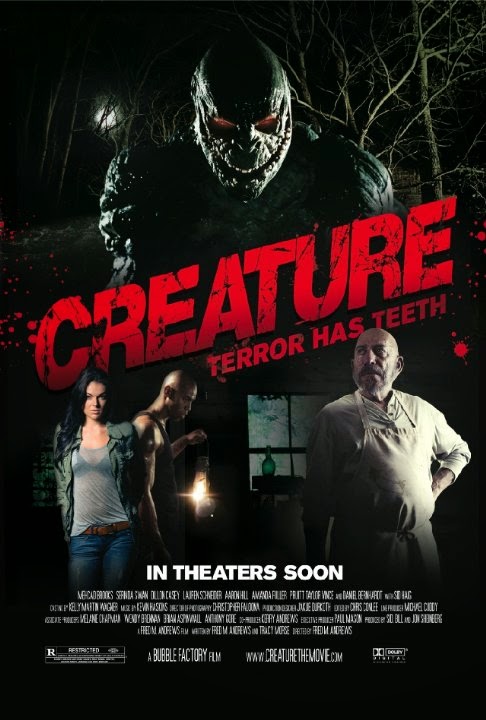 Creature (2011) is not a good movie.  I don't know if it was even trying, but it's not good.  You should probably call it a bad movie.  But I think it deserves to be considered a Bad Movie.

You see, there's a difference between a bad movie and a Bad Movie.  Bad Movies are the stuff of legends and have entire websites dedicated to them.  Bad Movies are things like Plan 9 From Outer Space or Future War or The Giant Claw.  They're movies that wrap around bad and become entertaining again.

I'm not entirely convinced that Creature manages this feat, but it certainly comes close.  I could see having it be part of a group movie night and providing entertainment.  Just... probably not the entertainment the creators intended.

But, I have to say, don't trust all the reviews you've read.  Some of them seem to have decided that they weren't going to like it, and thus didn't really pay attention.  You can't really complain about plot holes or bad reveal orders if you weren't paying any damn attention and missed explanations or missed entire conversations.  It's honestly rather embarrassing, especially when it's from critics I respect who I would expect to hold a sliver of professionalism.  Honestly, if you can't be bothered to watch the damn movie, maybe you should lead it off your list and just skip it.  Just because the movie was a dismal and almost complete box office failure ($216 per screen average; currently the 3rd worst for wide release movies) doesn't mean it doesn't deserve a fair shake.  At least if you're going to bill yourself as a professional critic.

The movie starts like the producers had a Horror Movie Checklist.  The opening scene is of some cute, nameless girl stripping and going skinny dipping.  Yes, it took all of three seconds to have full frontal nudity.  This didn't bode well for the movie.  And, after a minute or so of frolicking, she gets her legs bit off by a alligator.  Welcome to the movie!

We then move on to six twenty-somethings (at least they aren't 30 year olds playing teenagers) on their way to a weekend getaway.  Complete with driving like jackasses, making fun of southern stereotypes (we're in Louisiana), being jackasses to the locals, and just generally being utterly insufferable pricks.  You know, like every horror movie in the last twenty years.

I think this is where most people check out and stop paying any attention.  Unfortunately, that would be a mistake because right after we get this onslaught of horror movie tropes, we get Sid Haig.  Yes, that Sid Haig.  At first, I wondered why he was in this movie.  Was he short on his mortgage?  Did the producers have incriminating photos?  I really wasn't sure why Sid was in this pile, but it was a delight to see him.  Even in a film I was actively hating, Sid lit up the screen.  He's a great actor, and he certainly seemed to be having fun.

It's actually here where things start to turn around, and not just because of Sid.  The Lead Asshole finds a flyer about a local legend, and things start to pick up.  While he had just been a one-note character, he suddenly started to develop a little personality.  Not a lot, mind, but some.  The telling of the local legend of Lockjaw was actually quite well done.  It fits the setting, it fits the genre, and who doesn't love a little bit of mutation brought about by crimes against nature?  Things plow forward, rather minor twists are introduced, and everything charges ahead to the final showdown and so on and so forth.  Our ending is a little perfunctory, and there's plenty of problems (one character does a remarkable job running around with a bullet in his thigh), but I think some of the issues were funding was running out.  Also, I think they were trying to do a slightly different twist on the typical horror movie (and the typical creature feature).  They weren't trying to upend things like, say, Cabin in the Woods, but they were trying to be a little different.

I think they succeeded.  At least somewhat.  This isn't a classic.  And, like I said, this isn't a particularly good movie.  But I did enjoy myself.  The gore is rather minimal (I smell budget constraints), which means even squeamish fans of horror can enjoy it.  Frankly, I find that refreshing.  Too many movies just lean on their buckets of blood.  Of course, I wouldn't call this especially scary; I was never on the edge of my seat.  But then again, The Satanic Rites of Dracula wasn't scary either, but it was still fun. 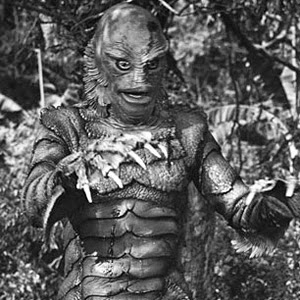 Okay, now it's time to talk about Lockjaw; the part I've been especially looking forward to.  When was the last time you saw a movie with a guy in a suit?  I mean, a monster suit.  Yes, in the grand tradition of everyone's favorite Gillman, Lockjaw is a guy in a suit.  And what a glorious suit it is.  Well, glorious might be an exaggeration, but it's still pretty great.  Aside from the head.  It's a big, bulky, full body affair, making him all covered in alligator hide.  All bumpy and spikedy and gnarly.  It's really quite well done.  He has clawed hands and enormous feet.  Looks like they build the suit around a pair of Wellingtons or some other kind of serious shit-kicker, because he has Frankenstein's Monster feet.  Sadly, the face is where things kind of fall apart, as per usual.  It's supposed to be inspired by an alligator, but I'm not really seeing it.  I mean, I didn't expect the tourist schlock version in the store in the beginning (a mannequin with a gator head sewn on) but the face ain't doing it for me. 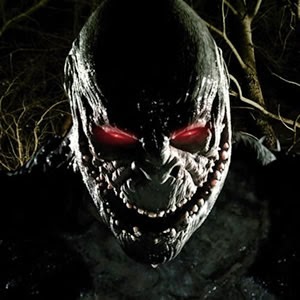 Look at this! He looks like the love child of the Joker and Pumpkinhead.  However, I have to admit that you could take this costume, not change a damn thing, and have an absolutely righteous costume for someone playing Yig.  Still, it was nice to see a movie using a guy in a suit again.  It gave Lockjaw presence and made the fight scene feel much more real.  Of course, it also means those hammer blows he rained down on a hapless character feel more real, leading one to wonder how the dude was supposed to live through it.  Still, you can't have everything.

So where does that leave us?  Well, it leaves us with a somewhat goofy horror movie that's more than a little bit of a throwback to the 50s creature feature with a double helping of 70s and 80s sleaze mixed in for good measure.  Honestly, I think you could do a lot worse.  Remember, if you ever find yourself saying, "This is the worst movie I've ever seen", you probably need to see more movies.

If nothing else, Creature wasn't nearly as bad as Spiderman 3.