Cue up the Billy Idol 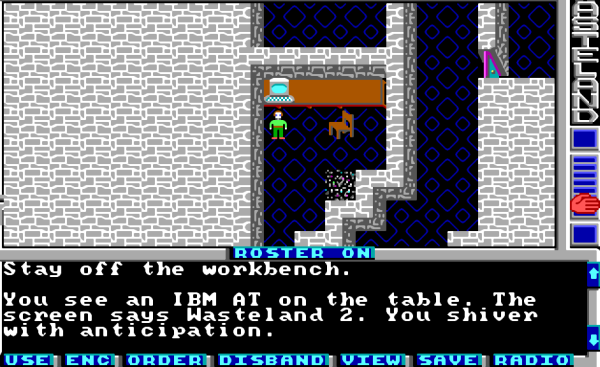 It's here.  It's finally here!  After twenty years of general waiting, and two years of baited breath, Wasteland 2 has finally arrived.  And it.  Is.  Glorious. I'm going to try to keep my nostalgia goggles on the shelf, and try to keep my biases in check, even though it's more than a little difficult.

Way back in 1988, Interplay and Electronic Arts released Wasteland.  The game is centered around the Colorado River, straddling Arizona and Nevada.  It's seventy some years after a (then) unexplained nuclear war that devastated the world.

A team of Army Engineers, seeing the world coming to an end all around them, took over a nearby federal prison, kicking out all the prisoners.  Over time, they invited in nearby survivalist communities to join them, eventually forming the Desert Rangers.

The original game was very much a product of its time; not just in the top down perspective, but also the fact that you're all but literally thrown to the wolves.  You start out at the Ranger Center and there you go.  What?  You wanted direction?  A quest giver?  What do you think this is?  The 90s?  If you'd read the manual, though, you'd know "exactly" what to do:


Your party, the famed Desert Rangers, have been assigned to investigate a series of disturbances in the desert. After several strategy meetings, you’ve decided to search for clues in Highpool, the Agricultural Center, and the Rail Nomads’ Camp, all of which are located to the west of Ranger Center.

There you go. That's all you get to start with.  Go west young man indeed.  However, as you play through, the plot does a great job leading you from place to place, giving you teasing little pieces of information, slowly filling in the broader story.  Highpool and the Ag Center help you get a few levels under your belt.  The Rail Nomads lead you to Quartz.  Quartz leads to Needles.  Needles leads to Las Vegas.  Las Vegas gives you the real plot and carries you the rest of the way to the end of the game where you save the world.

It's brilliant.  Absolutely and completely brilliant.  Even with the technical limitations of being forced to dump the majority of the game text into a separate book, and the minimal graphics, it still comes together like a finally oiled machine.  In a way, it lets your imagination take over, filling in the blanks and making it greater than the sum of its parts.

I still play Wasteland twenty years on, and I still find new things from time to time.

So where does that leave us now?  Well, now we return to the wastes.  Wasteland 2 takes place 15 years after the events of the first game.  The game starts in Arizona, much like the original.  However, after Saving The World, the Rangers decided to plop a squat on their laurels and just bask in the glory of their victory.

I run hot and cold on this.  As narrative justifications go, it's pretty reasonable.  In-world, it makes sense and I can't really complain about it.  Unfortunately, the real world intrudes, and it just feels like an excuse to avoid including Quartz, Needles, and Las Vegas.  I'm a little annoyed that the vast majority of the NPCs from the first one are dead.  Yes, dead.  Yes, pretty much all of them.  Right at the start of the game, there's a dozen or so gravestones with the names of the first game's NPCs.  Including my personal favorite: Ralf the Hobo.  As a consolation prize, though, he's listed as an Imperial Scarscalp, which is level 139.  I guess he did pretty well for himself.

Aside from that, most of my complaints are pedantic things (even more pedantic than the above).  They mess up the tribes in the Rail Nomads Camp, for instance.  Other than that, it's wonderful.  The modernization of the game is great.  The graphics have been updated, but they weren't the focus of the game.  The focus is the writing and the plot.  It's great. The game juggles several things at once.  The combat is tactical, but it's not a tactical shooter like XCOM or Jagged Alliance, for instance.

This is very much a sequel to Wasteland.  At times, I was worried.  There was a concentrated effort on the part of some backers to make this Fallout 2.5: Van Buren Take 2.  If you read other online reviews, they tend to talk up the similarities to Fallout.  Don't get me wrong, I like Fallout, but there have been six Fallout games.  For a time, I was worried this would be more Fallout than Wasteland, but I think Brian Fargo and inXile have made a proper sequel.

Now, this review is mostly based on what I saw during the beta, since I've been really busy since the release on the 19th.  Also, I really can't comment on the second half of the game in California, since I won't be seeing that content for weeks.  They estimate the length of the game as roughly 80 hours.  However, I'm an explorer.  I'll be taking my sweet time and savoring this game.  And believe you me, there is plenty to savor here.

The Classic Edition of Wasteland 2 is available on Steam, GOG, Glyph, Origin, and damn near any other digital distribution platform you can think of.  It's a reasonable $40, and as an extra added bonus, it includes the original Wasteland with updated character/enemy portraits and an integrated paragraphs book.  Many people complained about the voice actor for the original game, but I thought he brought a wonderful Tom Bodett-style down-home charm to it.

This is a wonderful slice of gaming history.  Well worth the price of entry.  And where else can you have your punk-rock adventuring party and their faithful... goat?