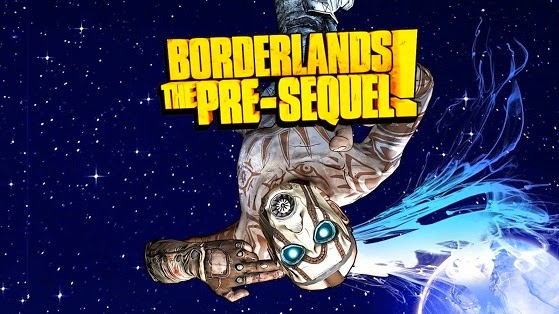 Sadly, I've only managed about an hour or so of play time with Borderlands the Pre-Sequel.  I normally wouldn't bother writing something up so early (Wasteland 2 was an exception because I'd been playing it for months in the Beta), but how often do I get to write about something current?  I mean, the game launched today!  I gotta catching this train while I can!

Anyway, Borderlands the Pre-Sequel (BtPS) is pretty much right what it says on the cover.  The entire game is a flashback being told after the events of Borderlands 2.  It tells of the rise of Handsome Jack, and why the various people were working for him, and all that fun stuff.  But, since it's being told in flashback, there's plenty of interjection by the Vault Hunters of Borderlands 1 (who seem to be running the show; not sure what happened to the crew from 2).  In other words, it's as zany, silly, and unserious as you'd expect from this series.

BtPS takes place on Pandora's moon which, being a crummy moon, doesn't really have any atmosphere, which gives rise to an oxygen meter mechanic.  There was quite a bit of grumbling in early press about this, and I was a little concerned at first myself, but what I've played, it doesn't seem too bad.  There are little "springs" of oxygen that you can stand on to recharge your meter (which fills quickly), there are oxygen exchangers that create an oxygenated area a half dozen or so yards radius, and almost every foe drops oxygen canisters, which are like health packs for your oxygen meter and they fill it by 25%.

That 25% is important.  See, your oxygen meter is determined by a piece of equipment call the Oz Kit.  The kits are kind of a combination of shield and class mod.  They give a varying level of oxygen meter (thus the importance of a percentile refresh), but they also give various bonuses, such as improved damage while airborne or increased stomp damage.

Oh yeah, stomp damage.  Or, more specifically, "butt stomp".  The other big mechanical change BtPS brings us is low gravity, which... is really really neat.  You jump about twice as high, you fall slower, you can burn oxygen in your Oz kit to do a double jump, and you can rocket down to the ground with a small area attack: the butt stomp.

While the butt stomp is kind of juvenile, the low gravity drastically changes combat strategy, and not just dealing with possibly having increased damage while airborne or other things.  The low gravity, and ability for high jumps essentially introduces a z-axis to the game.  It may be a limited z-axis, but it's still there, and the first time a psycho jumps up to power bomb your head is a pretty harsh reminder.  It takes some getting used to, but it's fun.

And, really, that's the whole point.  The Borderlands games are all about the wacky fun, and this latest installment has it in spades.  It's still a numbers game at heart (your progression is all about making little numbers into bigger numbers), but it's great fun.  It still has it's doofy sense of humor and the NPCs all have their personalities nicely intact (especially Handsome Jack).  I don't know if it's necessarily going to be worth the $60 AAA price tag its sporting, so it might be worth waiting for a sale.  But if you enjoyed either of the first two, you'll feel right at home here.