Back to the Night Land 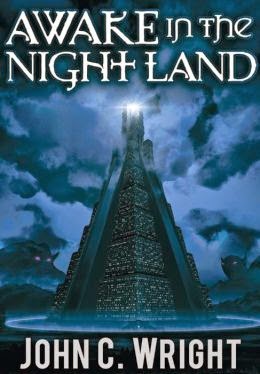 Right, so, finally got around to this one.

This is actually a collection of four separate but interconnected stories written because Mr. Wright loved The Night Land.  The author's introduction is, in fact, a loving tribute to the original work, and shows that Hodgson's original had a tremendous impact on a young John C. Wright.  I, on the other hand, wasn't nearly so smitten.  That being said, I think Wright's foray into this world is considerably more accessible.  If nothing else, 21st century aping of 19th century aping of 18th century writing is enough removed that it's actually more readable.

Also, as an aside before I get into the book itself, I just have to say that I really love the cover Castalia House commissioned for this book.  From the look of the Last Redoubt, to the ghostly glow of the Earth Current at the base, to the ghostly Watchers in the background.  Cover artist Jartstar did an amazing job.  I've actually found myself just sort of staring at it.  Ahem, anyway.

The first tale, "Awake in the Night" serves as something of a parallel story to the original tale.  It's another story of a young man going forth into the Night.  However, unlike the original, it doesn't deal with the excruciating minutiae of  moment-by-moment explanations of every single thing the narrator is doing.  Wright is willing to let weeks of "woke up, ate, drank, walked, nothing happened, ate, drank, slept" go by.  It's a nice switch.  He also delves a little more in the lore of the world without gutting the mystery.  For instance, he tells of the appearance of a Watcher, but it's a quickly told anecdote of when the Watcher showed up; the denizens of the Last Redoubt still don't know what the Watcher is, nor why it's there, nor its thoughts or motivations.  They know it showed up half a million years ago, but that's about it.  Perfectly fitting for an unknowable and unfathomable being.  Still, it makes the world feel more alive (irony notwithstanding).  It's a tale of friendship, erotic love (in the classical sense), hubris, the fallout resulting from eros and hubris, agape love, sacrifice, and eventual redemption.

"The Cry of the Night-Hound" is the second story in the collection, is set one million years after "Awake in the Night", and is probably my favorite of the four.  As an aside, one of the things about writing in this world is the vast gulfs of time one can skip along.  "Cry" is a tale of political corruption, familial honor and loyalty (as in, loyalty and honoring the family name), loyalty and love for family members, as well as the common themes of redemption and suffering through trials by fire.  And, ultimately, perhaps, redemption.  It's an interesting little story, if for no other reason than the pettiness of the ruling classes it exposes, and for how it effortlessly demonstrates how societies change, grow, devolve, and recover over the years.  After all, people have been living in this one arcology for millions upon millions of years.  In fact, humans, as a thing that exist, only range back about two and a half million years ago; five and a half if you count from when we split from the chimps.  Humans have thus lived in the Last Redoubt for far, far longer than humans ever existed, in any form, outside of it; potentially by an order of magnitude longer.  To say nothing of the paltry 200 thousands years modern humans have existed.  Just imagine how alien life in the Redoubt would be.  Wright teases societal changes with how different life in the Redoubt is between the various stories.  I almost wish he dove into those changes more, but he keeps himself grounded in the first person, to make the tales more intimate.  Considering the gulfs of time at play here, that's probably wise.

The third story, "Silence of the Night", skips further towards doom, putting us three million years before extinction and a bare fifty thousand before the Fall of the Last Redoubt.  That second bit there is new information; the first two stories simply told us how many years before the extinction of man.  Like the previous two stories, it details a trek into the Night (as one would expect).  Unlike the previous two, it deals more with the eventual fate of mankind and the motivations of the unwholesome beings beyond the walls of the Last Redoubt.  I'm not as big a fan of this story as it's a little two forward, and things being unknowable and alien is part of what made the Night so scary.  Being given a blow-by-blow description of the final fall of man is like reading James Blish's More Light: it is far more terrifying to be given glimpses of the terror contained in The King in Yellow than to actually read the play (that being said, More Light is a fantastic little story and worth reading if you can track it down).

And, finally, "The Last of All Suns".  The title is rather literal, as the story is set in the year "ten decillion vigintillion", which is some massive number that I'm not even sure how you calculate.  Decillion should be 10^33 and vigintillion is 10^63, so are we looking at 10x10^96?  10x10^2079?  Let's just say it's so far in the future that the time skips of the previous chapters look like brief pauses.  I won't detail this story because, frankly, just giving what year it is should give you some idea of what to expect

Scattered throughout these tales are tantalizing bits of history.  For instance, "Awake in the Night" references how in the nearly-forgotten past (ie: the far future for us), mankind traveled the stars and learned, to their horror, that every world they visited was a desolate, destroyed world, implying that the Earth is just the last world to be devoured.  While this is a change from the original (wherein the Sun and the stars exhausted their fuel), it still fits nicely, and works a little better in my opinion.  Partially because stars don't work like that, and partially because I'm a sucker for cosmic horror.

He has, however, kept with the suicide capsule being placed in the arm, something that continues to annoy me to no end.  Once again, if the suicide capsule is needed to prevent the destruction of the soul and the erasure of your essence from the Memory of Man, why the hell would you put it in your arm?  Which, by the way, is covered in armor?  Put it in a false tooth like a sane person.  It's been millions of years, guys.  Get it together.

There are also points here and there where it becomes clear that you are no longer listening to what a character is saying, but listening to what the author is saying.  While I wouldn't go so far as to call it an authorial filibuster, or even an authorial sermon, it's certainly quite clear when it happens.  That being said, it's not too terribly intrusive; nor is it terribly out of place, considering The Night Land had a few by Hodgson as well: did you know he was a big proponent of body building and weight lifting?  After about ten pages you certainly will.

All and all, this is a fantastic collection.  The copy editor needs to be beaten with a wet noodle for the numerous typos, but they never destroy meaning, and saying Castalia House is a small press is beyond understatement, but it's still distracting.  And it takes away from the fluid prose of Mr. Wright.  If nothing else, this collection makes me want to give The Night Land another try.  This is some truly fantastic fiction, straddling the dying earth, cosmic horror, and super-science genres, and it makes it work.  What's more, you don't need to have read the original to understand what's going on here.  Important things are explained, and mere references are left well enough.  And while I won't echo the breathless, hyperbolic praise some have given this book, but I can certainly, and without reservation, recommend it.  Especially if, like me, you're a sucker for Things Being Referenced With Capital Letters.