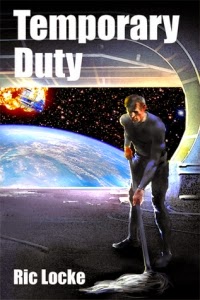 I've mentioned before my love of "blue collar dudes in space".  Temporary Duty falls into a fraternal-twin genre, "military grunts in space".  As you can tell by the cover, this is not a glamorous duty.  And I love it.

A little backstory is required here, I think.  I found out about this book because I follow the blog of the person who did the cover image.  Ric Locke self published the novel and was working on a sequel while he was in the process of dying of lung cancer.  Part of the money from the novel went towards getting him oxygen tanks and such.  I gladly bought a copy and then sat on the book for awhile (as I'm wont to do, apparently).  By the time I got around to reading the book, I found out that Locke had already died.  It was a weird experience, and I mentioned it on Facebook at the time.  Anyway, all that aside, the book is well worth tracking down on the eReader of your choice.

Temporary Duty is set in a nebulous future where mankind has their first contact with aliens.  The novel follows two enlisted sailors who are the first humans to go on the main alien ship, to help prep for the rest of the humans that will be arriving.  That means lots of scut work, like that chap on the cover is doing.  There is plenty of deck swabbin' going on in the first part of the book.

It's the slow, almost casual start that hooks me.  Instead of whiz-bang action or excitement, it's an E5 and an E4 getting fitted for space-coveralls, getting language lessons, learning how to order lunch, getting used to a 30 hour day, and doing work detail.  Mostly, again, swabbing decks.

It's because the aliens are traders.  They're using the humans, essentially.  The in-world politics are kind of amusing and strike me as perfectly reasonable.  The political situation on Earth, though, is odd.  It's a kind of runaway government kind of thing with a second depression mixed in and seasoned with a bit of Atlas Shrugged level intrusion.  It's odd, to say the least.  But, thankfully, it's more a backdrop the world is set against.  It doesn't feel like polemic, even though it's pretty clear that Locke didn't think highly of Washington; in other words, his views are likely on display, but he's not beating you over the head with it (cough cough Ringo cough).

Anyway, around the half way point, the whole thing goes full on space opera, with damsels in distress, space pirates, conspiracies, and the whole shebang.  It's great fun.  The book wraps nicely, with room for a sequel, but a sequel isn't required.  That's kind of bittersweet, since we'll probably never get a sequel as it sounds like Locke died before he was able to get much past the notes stage of his second book.  It's too bad, because I would love to read about the further adventures of Peters.

Still, we must enjoy what we have, and that's a fantastic little military sci-fi book.  Despite being about 540 pages, it's a quick, light read.  It's great fun, and I really enjoyed it.  I'm on my third or fourth read through now, and it's likely to be a go-to book when I need a break for years to come.