So, the other day, Marko Kloos and Anne Bellett declined their Hugo award nominations. This is bad enough on the surface, but I think it also demonstrates something a little bigger, and represents a need for Kate Paulk to reconsider Sad Puppies 4, and indeed, the entire Evil League of Evil should take a moment to think long and hard about what they want to accomplish with Sad Puppies and where they want to go from here.

Now you, dear reader, are probably a normal person; a sane person. I can only assume that the above made little sense to you, so I'm going to go ahead and give some background information about what's going on here. Now, I'll come right out and say that, at the very least, I'm amused by the Sad Puppies hullaballo, if not outright supportive of it. Or at least I was. Anyway, with all that in mind, I'm going to try to be objective here. There's already been more than enough hyperbole and misrepresentation as is (looking at you, EW). 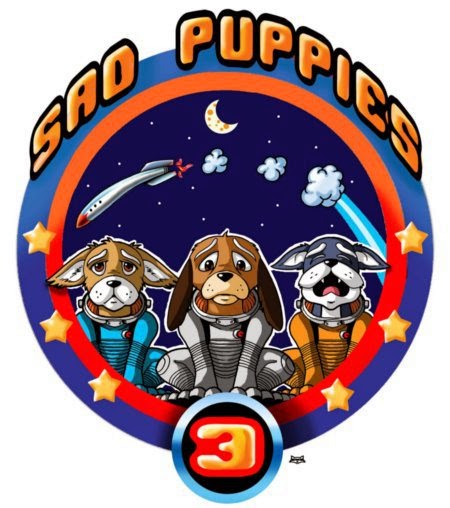 The Campaign to Prevent Puppy-Related Sadness (because nothing makes puppies sad like bad message fiction) was started three years ago, somewhat as a lark, by author Larry Correia. Since then, it has grown every year, and the name has been shortened to Sad Puppies. Now, this was never a particularly series endeavor. Larry's "campaign manager" was a manatee named Wendell. From what I've seen, it was about 80% "get stuff we like on the Hugo ballot" and about 20% "poke fun of the people who take this super seriously". Regardless, we're here today in the middle of Sad Puppies 3, which wasn't even run by Correia this time around, but rather by author Brad Torgersen.

Which brings us to Rabid Puppies.

Last year, Correia included a work by infamous internet boogeyman Vox Day. For those not familiar, Vox Day is something of a provocateur. He holds opinions that are not, shall we say, mainstream. For all the venom spewed around about him, you'd think he was a particularly loathsome KKK Grand Cyclops or something, but I don't think that's particularly accurate. While I don't agree with him on, well, most everything, I simply think he's in error. He's far from evil. Your average ISIS member has a much firmer grip on raw evil that Vox Day would even dream about. No, his greatest sin is that he doesn't care. He's outspoken, willing to wade into the mud, and he doesn't give a damn about what anybody thinks of him. In other words, he's not afraid of ruining his reputation, because he doesn't care what anyone thinks about him. That, and I think he really, really enjoys being a boogeyman.

Anyway, last year, Correia included a novella (novelette? One of those) by Vox Day. As Correia puts it, he included the novel(la/ette) because he thought it was good and because "Satan hadn't written anything that year". This caused a predictable freak-out in the predictable sections of the internet. Now, I personally haven't read it (I have a copy… somewhere), but I have read his doorstop of a novel, A Throne of Bones, which isn't too bad, to be perfectly honest. I've also been a fan of Psykosonik since the mid-90s, so I'm not going to throw the man under a bus because I disagree with his views on women's sufferage. 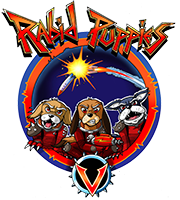 During Sad Puppies 2, Vox Day supported the project, although he offered a slightly different slate. This year, however, he went all out, and submitted his own "official" slate, the Rabid Puppies. I'm not about to speak to what Vox Day thinks, but I get the distinct feeling his interest was less in getting the Hugo awards to recognize the kind of SF/F he liked (or to remember that it once loved more pulpy fiction) than it was his desire to play Nero and burn it all down. Despite the confusion promulgated by many in the media and on the internet, the two slates, while having similar names, are not related. Baking soda and baking powder also have similar names, but they're hardly interchangeable.

Also, while I'm at it, GamerGate had nothing to do with this. Yes, a big GamerGate supporter on Brietbart did a story on Sad Puppies, but that was after nominations were closed. Frankly, judging by people's reactions , you'd think they'd just stop talking about GamerGate and Vox Day. What was that about saying the Devil's name? I'm guessing these are the same people who said "Bloody Mary" two and a half times in the bathroom when they were teenagers.

So now that I've spent about 700 words on the background, I can move on to the actual point. Hopefully. Assuming I can remember what the hell it was I was wanting to write about in the first place.

Oh yeah, the fate of Sad Puppies going forward. I think the news the other day is cause to stop and reconsider the true goals and purpose of Sad Puppies. No, I don't mean the mewling whine from Connie Willis, I mean the two withdrawals mentioned at the top of the post. They're linked, so you can read them for yourself; I'm just going to give my brief impressions, because while they're both in regards to the same thing, they say it very differently.

Marko's retraction reads like a statement given under duress. He's a self-published author, and his statement reads very much like a man who wants a contract with a publishing house, but is worried he won't get one if he doesn't sufficiently condemn Goody La^H^H^H^H^H^H^H^HVox Day. Yes, we're going into interpreting one's motivations and subtext, but that's the impression I get reading his comment. That's bad enough. Anne's is far worse.

While Marko's post reads like a man with a gun to his back, Anne's reads like a woman with a broken heart. If it was a letter to the editor, I would expect to see tear stains on the paper. It's doubly troubling when you consider the fact that a week ago, she felt the need to post her progressive bona-fides (woman, bisexual, socialist) in order to stave off attacks from the Internet Hate Machine. It seems that the constant bullshit finally wore her down and she declined her nomination.

Both wanted their work to be judged based on itself. Marko didn't want his work to be nominated with the taint of Vox Day's Rabid Puppies, and Anne didn't want to be a political football. I think this puts the Puppies in a very awkward position. Or rather, it puts the sad ones in an awkward position; I don't think the rabid ones particularly care.

If it really is about getting recognition for people who are normally overlooked by the Hugo Awards, then I think that the Puppies should pack it in and call it a night. It's perfectly clear that deserving authors will be hounded and libeled for the sin of being liked by the wrong people. At this point, it doesn't matter who the Puppies pick or what they say, they're going to be accused of trying to purify the awards for "cishet white dudes". People will be attacked, sniped, and tarred thanks to everyone's favorite: guilt by association. Now, people on the slate like Kevin J. Anderson or Jim Butcher can easily weather such storms. They're both prolific enough and big enough (and rich enough) that all the internet rage in the world won't disturb their digestion.

So that leaves us with the Puppies in the awkward situation where new, lesser known authors have to duck and cover, lest their careers be destroyed, and the only people who can accept are either A) already outcasts (eg: Baen authors) or B) titanic popular authors who would just get a new dust collector. After all, the readership benefit of a Hugo win (let alone nomination) is dubious at best, but it seems an unknown would be more likely to benefit than Jim "Godfather of an Entire Genre" Butcher. Sadly, I think this means that the Puppies have proved their point: the Hugo Awards are a tight clique and are only for the people who sit at the cool kids' table; outsiders need not apply. At this point, I think they would be better served closing up shop. Let the vote totals sink back below 1000. Let the person who gets 50 votes beat the person who got 49 votes. Let it go back to being a logrolling circle jerk.

Unless they want to burn it all down and salt the earth beneath. In which case, by all means, carry on. Between them, the Sad and Rabid Puppies could easily burn the whole thing down. And you folks advocating a boycott or giving No Award? You're attempting to put out a fire by dropping an FAE on it. You idiots. I truly believe that the Puppies never intended to rip the awards apart, but it looks like that's what's going on here. The clique and the in crowd have decided to take their ball and go home, while putting landmines all over the playing field. Like I said, I was at least amused by, if not in favor of, the Puppies from the get-go, but I think continuing the campaign will accomplish little beyond ripping apart fandom and all but destroying Hugo Awards. Right now, I blame the anti-puppy folk for their scorched earth tactics. I can't speak to what Sad Puppies 4 will ultimately be, but I can't help but think it'll end up being a matter of "Challenge Accepted!" and the start of the mutually-assured destruction carnival.

There's been a lot of virtual ink wasted going on about Sad Puppies (yes, I see the irony). There's been a lot of outright falsehoods (it's not about making sure only straight white males win; look at the damn slate), and there's been some downright chilling implications being made by people. Probably the most disturbing is the one about how people should have been notified in advance of their placement. Just think about what that implies for a second. I've already mentioned smears based on guilt by association, but this whole notification thing is downright Soviet. Which is ironic considering how many of the people saying these things will be the first to denounce someone else as practicing McCarthyism.

In a way, this reminds me of my last post, and how people have forgotten that just because you like different things, or believe different things, or have different opinions on what constitutes good science-fiction and fantasy doesn't mean you need to be at each other's throats. There's room enough for everybody; from the people who want Captain Raygun Rescues The Buxom Blonde From The Drooling Space Mutants to people who want… well… dinosaur revenge fantasies, I guess. The Hugo Awards should be a big tent. The voting rules say it's a big tent: cough up your $40 and take a ride. You might not like slates, but they beat logrolling, and they beat vote totals that look anemic compared to an elementary school's class president election. If people want an award that only the Select Elite can vote on, they have that: it's called the Nebula (or about a dozen other smaller awards in various niches).

Personally, I'm kind of sad to see it take this turn. It would be nice if the pulp-lovers and the literary-lovers could manage to share the same genre without worrying about getting cooties from one another, but it seems that's too much to hope for. It would be nice if people could combat Puppy-Related Sadness and have fun with the Hugo Awards without be labeled as misogynists or racists, and without having to worry if they're going to turn the awards into a barren wasteland.