I don't know about you, but when I think of a reporter, I have a few archetypes that spring to mind.  The first is the fast-talking, hard-hitting, hard-drinking chap who talks out of the side of his mouth and has a placard that says PRESS in his hat band.  He's also usually going on about "what a scoop!" while running to a pay phone.

The next archetype to spring to mind is the reporter-turned-opinion man.  The two that instantly come to mind are rather local, but they're Mike Royko and Rick Kogan.  I never heard Ryoko's voice, but Kogan sounds like he spent 300 years having a dozen cartons of Chesterfields for breakfast.  They're cynical, but fair.  They've seen it all, done most of it, and bring a wealth of experience to their writing.

Following that, we have the maniacs.  The Hunter S. Thompsons of the world.  When it comes to Gonzo journalism, you're either setting yourself up to writing a million words, or nothing.  I'm opting for nothing.

The last group that I usually think of are the modern investigative journalists.  Sadly, in many ways, "modern" means "1980s" here, since shrinking news rooms and shrinking budgets have greatly reduced their ranks.  But here we have the 20/20 era John Stossel or David "Fight Back!" Horowitz or, going local again, Dane Placko.  Still, these are the guys who do volumes of research and make sure their ducks are all in a row when they go after the corporations and politicians.  The people who actually speak truth to power, as opposed to random Tumblr activists.

Sadly, all of these are a dying breed.  The first probably never existed outside of Hollywood, the second is rare just for the time required, the third tends to flare out almost instantly, and the last is being eaten by budget cuts.  So, what we have left is... well... this: 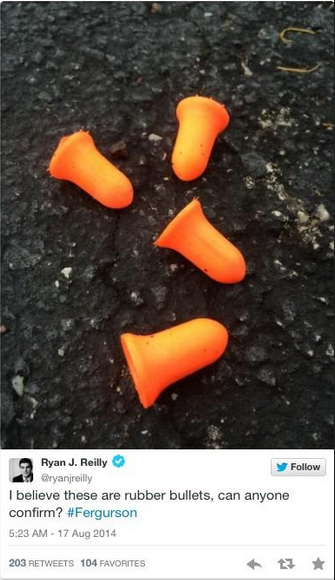 No, those are foam earplugs.  For one, the vast majority of rubber bullets used in riot control are fired by riot guns.  In other words, shotguns.  Now, I don't know what kinds of riot control gear is being used in Fergurson, but I'd be willing to bet that it's 12ga shot.  Which means the rubber bullets will look like tiny little superballs.

Now, I'm not specifically doing this to mock Reilly, although I think he probably deserves it.  I'm not going to give him a pass because he's unsure and asking a question.  If nothing else, you'd think he could have asked someone there instead of making a doof of himself on Twitter.  But, really, I'm just using him as a springboard.

So how can a grown man be so insulated as to have no idea what an earplug looks like?  Because he's never had a job outside of journalism.  The problem here is that most of the "young turks" going out and doing on-location reporting have never done anything outside of reporting.  They were on their high school paper, they went to college to study journalism, they went out and got jobs as journalists.  They've never been anything else in their professional lives.  He doesn't know what an earplug looks like because he's never done anything where he might run into them.

I can't help but wonder what it would be like if the journalism schools were all closed down.  Or if they took a page from the FBI where you have to have had a job for two years before you can apply.  How can you report on the world if you know nothing about it?  We have people reporting on law that have no clue how law works (outside of a couple episodes of Law & Order).  People reporting on guns while creating infographics that include guns from HALO.  People reporting on anything and everything when all they know is... reporting.

Frankly, I think we would be better served if journalism schools would be more like trade schools than four year university degrees.  Teach people the basics of ethics and the nuts-and-bolts of reporting, and that should really be enough.  Maybe an overview of various stylebooks.

I could be completely off base here, I fully admit that.  Very little of this post was planned ahead, I'm kind of just rolling with whatever my mind spits out.  But if you look at my examples in the beginning, what they all have in common is real life experience.  Or, at least a willingness to do research.  If you can snap a picture of earplugs and send a Tweet, aren't you able to do a quick Google search?  Or check Wikipedia?