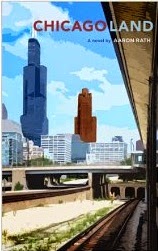 I am not a fan of coming of age stories in a general sense.  At this point in my life, I'm not going to find them inspiring; I'm more likely to find them depressing.  It's not that I'm ancient or ready for AARP, but I've pretty come of age.  Did that awhile ago.

Of course, when somebody front loads a review with this many qualifiers, you just know there's going to be a "but..." or a "however...".  And there is, so I'll spare you the anticipation and just get on with it.

Chicagoland is the debut novel by Aaron Rath.  Written like a memoir, it tells the tale of Scott Duluoz and his... well... his coming of age.  Unlike most coming of age stories, this one actually resonated with me.  I think part of the reason for this is because we're of an age.  When he's talking about his anticipation of riding the dotcom boom, I was sitting in a coffee house shaking my twenty-something head saying, "That's totally gonna bust."

The character of Scott is roughly five years older than me, so I can easily relate to much of what he went through, even if the specifics were different (I've never dropped acid while crashing at a frat house on a hippy college).  There were several times while I was reading this that I found myself nodding along with various antics or concerns, so on and so forth.

One of the most poignant moments in the book is when Scott is walking down a street at night and notices that he's in the 2000 block of the street he's on, which makes him think about the years corresponding to the addresses he walks by.


2000: present day, adrift at the edge of the Chicagoland sea. Overworked, underpaid, indebted, remote, and lonely for the dawn of a new millennium...

Adrift?  You bet your ass adrift.  In many ways, this book captures that sort of listless, lost, enervated, and aimless sort of ennui that settles in on your shoulders when you hit your early twenties and realize that most everything in your life up to this point has left you utterly unprepared for how the world really is.  Even setting aside modern additions like six figure student debt for a largely useless "Studies" degree, every poor bastard leaving college feels that.  You got to college and you thought, "Damn, high school was for chumps.  This is the real deal!" only to have Life laugh and kick you in the groin.

So perhaps I'm a little cynical.

Perhaps that's part of why I could relate to Scott so easily despite our experiences being wildly different in  the particulars.  The paint may be different, but we're driving the same car.  Then again, perhaps that's sort of the point of a book like this.  You grab hold of a connection with someone else, finding silent camaraderie in a shared, or at least similar, experience.

Frankly, isn't that what matters?

If you're interested, you can find it on Amazon.  Rath e-published this himself.  It's a measly fin to buy or you can read it on that Kindle unlimited thingie if you have that.