Zombies. Why Did It Have to Be Zombies? 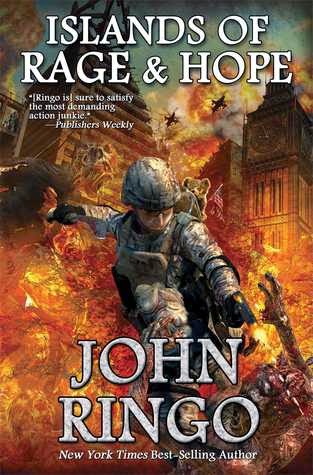 It's a book by John Ringo.  I could probably just end the review here.  But I won't.

Islands of Rage & Hope is the third book in the "Black Tide Rising" trilogy series.  Not to be confused with Dark Waters, which is what I originally wrote.  Anyway, on with the book.

First issue is the setting.  I am sick an tired of zombies and have been for quite some time.  I've never found them to be particularly interesting, so the series is starting in a hole for me.  On the plus side, Ringo's probably just using them because a zombie apocalypse gives him a lot of enemies for his heroes to kill.  When you're looking at a 1-3% survival rate, you can mow down thousands of zombies without worrying you might run out.  This means he's not trying to shoe horn in tired social commentary via zombies (looking at you, Romero).


The second issue is the characters.  The central family are just too good.  They were prepared for an apocalypse, they're good with guns, they're good with hand-to-hand, they're good with sailing, they're good with everything.  He's tried (half assedly) to give the super girls issues, but since Ringo seems to get bored with things, it kind of goes by the wayside.  He's giving lip service to the fact that Faith has some serious PTSD along with the fact that she's teetering on the edge of a full on disassociative psychotic break (if you squint at the picture, you can see a teddy bear in her backpack; that's Trixie).  As a coping device, Trixie is interesting, but she's barely mentioned in this book.  In the first two books, Sophie was walking the line of alcoholism.  Completely missing from this book.  Not even mentioned.

But wait!  There's more!  Sophie is... fifteen.  Faith?  She's thirteen.  Look at that book cover again.  While that specific scene isn't really in the book, that type certainly is.  Faith is "three months from fourteen!" and she puts Rambo to shame.  She's a bigger badass than the entire cast of all three Expendables movies.  Sure, it's fun as Hell, but when you stop and think about it?  It strains credulity, to say the least.

But wait!  There's even more!  I really don't want to get bogged down on this, so I will simply leave you with two further bits of information and move on from Sophie and Faith.  1) the phrase "jailbait" is used on numerous occasions (mainly in regards to Faith).  2) they were at least loosely inspired by Ringo's own daughters.  Oh no indeed.

The other character I want to touch on is Walker.  Good Lord, Walker.  Walker is... a cartoon.  When he was introduced in the second novel, you knew there was more to him than he was revealing, but he was just excessively competent.  Fine, sure, to be expected.  His identity is revealed in this book, and all I could think about was that inane scene in Under Siege where they pull up Segal's character's secret dossier and it just goes on and on about what an unmitigated badass he is.  It's... excessive.  It's also annoying.  Wasn't being retire Special Forces enough?  Did he really have to be the Biggest Badass To Ever Badass In The History Of The Universe?  Also, he's 70.  I don't care how awesome he is, he shouldn't be able to breeze through an eight hour fight with zombies.

The other problem is actually one of pacing.  I honestly didn't expect pacing to have been an issue, but it most certainly is.  The bulk of the book is the Continuing Adventures of Badass Wolf Squadron.  And then, with 30-50 pages left in the book, they back up and zip across the Atlantic to go do a critical mission in London.

Okay, look, the mission is (more or less) just fine.  The nature of it being something that needed to be done on a schedule is also fine (and the reason for the rush is convenient, but perfectly likely).  Really, the problem I have with it is that you have the book faffing around for about three quarters of the length, just doing what they've been doing before this hyper-rushed extraction.  It just feels tacked on.  That London rescue could have been lopped off and replaced with more Caribbean stuff, and then use the introduction of the London rescue as a cliff hanger, letting the bulk (or half) of the fourth book being the London rescue.  Granted, I'm hardly a professional here, but that seems like a logical way to do it.  There was no need to rush the London rescue, which makes the massive mêlée in the end feel oddly anticlimactic.


So where does this leave us?  Well, based on what I've been told by people more familiar with Mr. Ringo's modus operandi, it leaves us in a bad place.  Ringo appears to have a habit of growing bored with series and letting them just wither while he starts another series he won't finish (as an aside, he's hardly unique; this seems to be a common issue in SF/F).  That said, I'm not going to condemn a book because Ringo has a habit of abandoning storylines.  This is one of those series where the books don't really stand alone.  Hell, I was lost on a couple people because it'd been awhile since I read the earlier books.

Still.  Despite the fact that it doesn't really stand alone, despite the major character issues, despite the mind boggling pacing, and despite the awful titles, it's still fun.  I still enjoyed it, despite all the eye rolling.  And, honestly, I could recommend it and its series.  It's not nearly as good as the second book, nor anywhere near as good as any number of other books, but frankly, it was fun.  And sometimes, that's enough.