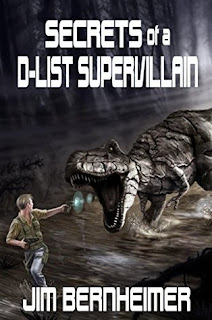 A little over a year ago, I wrote a short review for a pair of novels, Confessions of a D-List Superhero and Origins of a etc.  Towards the end of that review, I mentioned that I had seen that the author, Jim Bernheimer, was planning a third book.  At the time, I said,


"I'm not entirely sure where he's going to go from here.  He can't really do another prequel unless he plans to spend a couple hundred pages on Cal's college days, and the story was pretty much wrapped up at the end of Confessions."

Well, now we know why Jim's a published author and I'm just a goof with a dopey theme and a Blogger account.

What I'm trying to say is, this book impressed me.

Okay, so, in Confessions, we got a first person tell-all book.  All the layers weren't perfectly clear at the time, but there's actually a few "levels" involved.  Essentially, there's what really happened (in universe, naturally; I know it's a novel), which is then filtered through Cal's perceptions, then further filtered by what Cal decided to write, and finally run through the book's (in-world) editor.

This took a bit for me to wrap my head around, but you don't really think about it when reading Confessions.  The first book just feels like a first-person novel, but it's got this extra layer of in-world editorial editing going on, since it's his tell-all book, not just a first-person story.

Anyway, Secrets makes that distinction very clear.  It takes place almost immediately after the final epilogue of Confessions.  But what's clever about this book is it's not just The Further Adventures of Cal, it's filling in the gaps, and revealing some of the "what really happened" moments from the first book.

The general structure is Cal telling Stacy about everything that's happened in the previous year, what with him being dead and all.  So you have an interesting format of each chapter starting with Cal, in first person, telling the reader about what's going on (making breakfast, changing his daughter, etc.), before spinning into a yarn about what had happened before, like just how he managed to get Imaginary Larry on his team.

This is both a tremendous strength and weakness.  The strength is that it's fascinating.  It gives you insight on just how he did all the things he did at the end of Confessions, it also gives you new insight on the characters.  That new insight is also part of those editorial levels I mentioned earlier.  His views... colored certain depictions, painting people in better or worse light than they really were.  Secrets gives us what they're really like.  As it were.  It's still first person.

The weakness on the other hand, is something I seem to harp on all the time: copy editing.  To be fair, this book must have been a bear to edit, but there were quite a few problems.  Some were basic problems: incorrect words, missing words, missing punctuation.  The real issue is more keeping everything straight for the storytelling.  It's a book, so we can't put a sepia filter or do wavy lines for the flashbacks, so the text needs to be crystal clear.

Generally, Jim pulls this off.  The current storyline is in present tense while the flashbacks are in past tense.  Generally.  Unfortunately, there are quite a few tense issues, both in the current and in the flashbacks.  Add into this an extra layer of italics, which appears to be Cal's internal thoughts, or Cal's directly addressing the reader, even though the whole book is sort of Cal addressing the reader.  What I'm saying is, there's a couple times where I had to stop and reread because I got a little lost on what was happening where.  This sense of unease greatly ramped up when the "current" events ramped up beyond just Cal and Stacy catching up.

However, copy editing issues aside, this is probably the strongest book of the three.  Jim's writing has improved as he's gone on, and he's creating a much richer world here.  He had already started expanding things with Origin, but he pulls out some great stuff here.  Sherman the Haunted Tank was freaking brilliant and possibly his best creation to date.  He also drops some sinister hints about Imaginary Larry's life before Cal freed/kidnapped him.

There's some really good stuff here.  I wholeheartedly recommend all three books.  None are heavy reading, but they're all great fun and very enjoyable.  While Secrets is a book without an ending (it wraps up the backstory, just not the Current Crisis), and while he kind of overuses the exclamation point this time around, all three are great reads and I can't wait for the fourth book.

Now if we could just get some big publishing house to advance Jim a big fat check, he could start cranking out books.