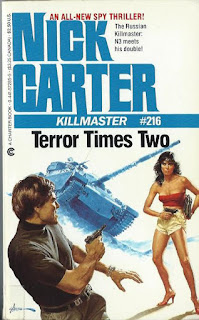 So, while on vacation, we went to 2nd and Charles, a pretty neat used book store.  A rather huge used book store, in fact.  While there, I wandered the isles, looking at spines, hunting for some good old fashioned pulp.  One of the ones I found was a series of Nick Carter books.  The one I decided to grab was today's subject, Nick Carter Killmaster #216: Terror Times Two.

Just look at that cover!  It just screams pulp, doesn't it?  We have Nick Carter in a nice Archer-esque tactical turtleneck, a brunette babe with a gun (who doesn't really appear in the book, she seems an amalgam of two characters), and a tank crashing over either waves or some snow, which really doesn't appear anywhere in the novel.  Seriously.  There's no tanks in this book.

This is some glorious spy-pulp here.

The Nick Carter books are a delightful artifact of the 70s and 80s.  According to Wikipedia, there were "at least" 261 Nick Carter novels, dwarfing even the highly prolific Remo Williams Destroyer novels or family-favorite punching-bag, Dick Francis.

These books were all written by "Nick Carter", a pseudonym used by a stable of authors working for the Charter publishing house.  This particular book was apparently written by a man named Jack Canon, which sounds like a pseudonym in an of itself.  The books are also dedicated to "the men of the Secret Services of the United States of America."  I'm sure they appreciated the gesture.

Nick Carter is, naturally, a spy's spy, who is rugged, handsome, skilled, intelligent, great with the ladies, and speaks pretty much any language a given novel needs him to.  He's described as an "American James Bond", but he doesn't rely on gadgets as much.  On the other hand, the novel isn't suffused with rampant sexism, so I guess it has that going for it.

I realize that I'm writing more about the Killmaster phenomenon than the book itself, but that's largely because the broader Nick Carter story is more interesting.  Terror Times Two is a rather pedestrian pulp spy novel.  Back in the Yom Kippur War, the US was going to smuggle a weapon system, named RPX712 (of course) to the Israelis.  The smugglers betrayed the US, but after the betrayal, the Soviets reneged on the deal, so the smugglers faked their deaths and scattered to the winds with the components.

Fast forward to the modern day (1986), and the Soviets have decided they want it after all, and are going about collecting the pieces.  Enter Boris Vandrostov, "the Russian Killmaster".  The bulk of the novel involves Carter playing catchup, trying to figure out what's happening and trying to stop Vandrostov from acquiring all the parts to the RPX712 to do... something.

The RPX712 was supposed to be some kind of missile guidance system, but it was ahead of its time, and not especially useful back in 1973.  However, modern technology means it could be used, but I didn't really understand what they were going to use it for, mainly because the terminology was vague.  Something about drones(!), but drone was being used interchangeably with both airplane and missile.  Honestly, it sounds something like a JDAM, which makes the novel oddly prescient.

Anyway, the novel is full of misdirects, sex, violence, and tons of tough-guy talk.  It also had plenty of weird quirks that stuck out like a sore thumb.  See, Mr. Carter likes to name his weapons, so we have Wilhelmina the Luger(!) and Hugo the stiletto.  Also, Carter himself is frequently referred to as "the Killmaster":

Carter held his breath and, at the same time, cursed his carelessness.  The note had been a nice touch, put him off guard, made him look at himself as foolish for even thinking that Vandrostov would take the bait.

Finally, the car came down on all four wheels and the Killmaster slid out the door.

I mean, it's usually used in action scenes, but it seems the primary check seems to be "have I said his name a lot lately?"  At least he's never referred to as the Killmaster during a sex scene.  That would be awkward.

I know I'm giving this book a lot of grief, but it's coming from a place of love.  I quite enjoy bad movies and I also enjoy bad books.  Now, when I say bad, they do have to try.  Age of Ice and House of the Dead were nearly unwatchable, while Plan 9 From Outer Space and Yor Hunter From the Future were glorious in their cheese.  Books are the same way.  Granted, the Nick Carter books were churned pulp, but they reveled in it.  It's a quick, light read (196 pages) that moves right along.  It also knows what it is and doesn't put on any airs.